Russia is buying millions of rounds of artillery and rocket ammunition to continue Putin’s war in Ukraine, according to US intelligence.

Russia is buying millions of artillery shells and rockets from North Korea, according to newly declassified American intelligence, a sign that global sanctions have severely restricted its supply chains and forced Moscow to turn to pariah states for military supplies.

…
There have also been signs that the effectiveness of some Russian artillery shells has been degraded because of storage problems or poor maintenance of its ammunition stocks. To be most effective at wounding opposing troops, artillery shells burst in the air, just before they hit the ground. But the crater pattern created by Russian artillery forces over the summer showed that many of their shells were exploding on the ground, reducing the damage to Ukrainian trenches.

While the condition of North Korean artillery shells is not clear, the country has extensive stocks of the ammunition.

There are a lot of moving pieces in this story, so let’s look at them one by one.

It is reported that Russia has been firing tens of thousands of artillery and rocket rounds since February 24. At the height of the fighting in Donbas in June (see Putin’s War, Week 14. Advanced Artillery, a Missing General, and a Grind With No Visible End), it was claimed that Russia was firing 60,000 rounds per day. Russia’s infantry and armor forces have been shown to be spectacularly bad for a lot of reasons that have been talked about since the Cold War (no professional corps of noncommissioned officers, disincentives to use initiative, reliance on rigidly following a plan that has stopped working, etc.) In addition, Russia has not called for national mobilization, which means draftees can’t be sent to Ukraine, and all the fighting must be done by “contract” soldiers. As a result, every Russian assault looks like a miniature Operation Bagration. The objective area is pulverized with artillery, and the ground forces mope in to take possession.

In a best-case scenario, Russia is burning through well over a million rounds of rocket and artillery ammunition each month in combat usage and losses to Ukrainian long-range fires. 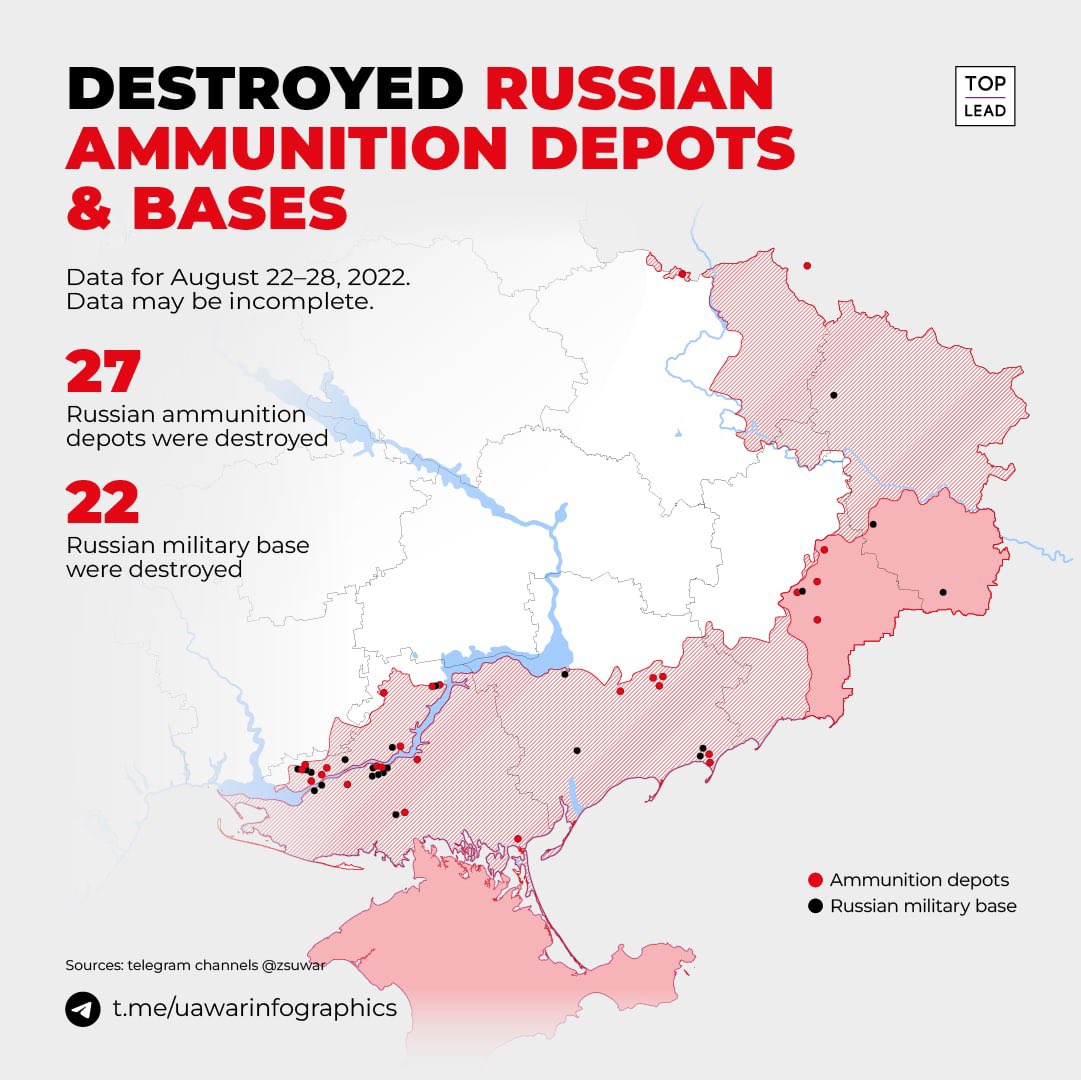 Some people claim that Russia is locking in the North Korean supply to keep the Ukrainians from buying it, as Ukraine has a decreasing number of weapons that use the same caliber rocket and artillery ammunition as Russia. This doesn’t strike me as plausible. The only countries manufacturing this ammunition in quantities are Russia and North Korea. It is hard for me to imagine a scenario in which Ukraine buys artillery ammunition from North Korea. China is phasing out its Russian-caliber artillery in favor of more capable ammunition, reducing its ability to aid Russia with ammunition unless they replace the guns that use it. In the May timeframe, it was reported that NATO nations had scoured the world for artillery rounds compatible with Russian guns to send to Ukraine and exhausted the supply. This coincides with the NATO decision to start arming Ukraine with guns firing NATO standard artillery ammunition (Ukraine Has Joined NATO Whether Russia Likes It or Not, and More Are Yet to Follow).

Does this mean Russia is in dire straits? No one knows exactly what this means other than the Russians believe that they can’t produce enough ammunition to fight a war in the near term.

According to estimates produced by the Royal United Services Institute, Russia can produce about 2,000,000 rounds of its standard 152mm artillery ammunition per year (see page 5 of Ukraine at War: Paving the Road from Survival to Victory). At current usage rates, that will support two months of combat operations. The same study assumed that at the burn rate in June, around 60,000 rounds per day, Russia had stockpiled six years’ worth of ammunition since about 1991. But things aren’t always as they seem. Today, one of the analysts who prepared the report said that number is based on the number of empty projectiles that can be manufactured; it does not consider filling them with explosives or manufacturing propellant. You can read his whole apologia here, but it, in my view, points to the danger of taking anything produced by think tanks all that seriously.

As hinted by the New York Times article, I also suspect that as the Russians have dug into their stockpiles, they have discovered that a significant amount of war reserve ammunition was not properly maintained. Nothing we’ve seen about the Russian defense establishment so far convinces me that there is the competence or energy to develop and execute a consistent program of rotating war reserve ammunition to training stocks. Improperly stored ammunition, especially over a period of years, leads to things like a high dud rate and also to hypersensitivity, and unplanned explosions.

Of course, there is another dog in this kennel that hasn’t yet barked. A typical NATO howitzer has a service life of about 10,000 rounds fired through the tube. At that point, the gun tube will require refurbishment at a depot. If you go beyond the service life, the range, accuracy, and rate of fire of the gun suffer. Metal fatigue can eventually cause embarrassing stuff to happen, like the gun tube splitting.

In addition to the wear on the gun tube, major subcomponents require replacement or refurbishment. If the estimates on artillery usage were accurate, the Donbas offensive alone would remove 180 Russian howitzers from service to be rebuilt in June alone. There is no way that happened. There is no way pulling 100 guns out of combat each month for rebuilding is sustainable.

As I’ve pointed out previously, Western aid to Ukraine has put Russia at a disadvantage. Ukraine is cycling out Russian-made trash and replacing it with real weaponry. It is also drawing on the manufacturing capacity of Western Europe for ammunition. On the other hand, Russia used its first-line equipment in the initial invasion and is now replacing vehicles, weapons, and ammunition from war stocks.

Unless it can manage to negotiate a cease-fire that locks its gains in place, my prediction is that Russia will be back to the February 2022 line of contact, or worse, by the end of the year.

I also hope that someone somewhere is looking at the usage rate for artillery and rocket ammunition in this war and ensuring that we build out our manufacturing capability to meet the current threat from China.