Nikki Fried lost her bid to be the Democratic nominee to challenge Florida Governor Ron DeSantis (R), but that hasn’t stopped her from taking to Twitter to be wrong about everything.

In her latest tweet, posted Sunday morning Fried shows us that she isn’t ready to move on from the race she isn’t in, nor does she understand how acting works. Fried writes, “I may have lost my primary, but at least I’ve never put on a fighter pilot costume to pretend I was Tom Cruise without the looks, charm, or skills.”

Fried seems to not understand that Tom Cruise is not a Navy fighter pilot, although he is an aviator who has received a pilot’s license. Cruise is an actor. He has portrayed a well-loved character in Top Gun films, known to audiences as “Maverick”. I can’t believe that needed to be said, but here we are. To simplify this debate: Naval officers like DeSantis wear uniforms while Hollywood actors like Cruise wear costumes.

DeSantis did serve in the US Navy on active duty from 2004-2010, and in the reserves after 2010. Much of DeSantis’ military service was related to his legal background as a Harvard-trained lawyer. Records show the legal roles he served as include prosecutor, defense attorney, international law attorney, and a Judge Advocate General’s Corps Officer. The Florida Phoenix reports,

The records provided to the Phoenix reference Iraq and the Arabian Peninsula, and DeSantis’s duties in the months on or around 2007 and 2008 were described as special operations, special reconnaissance, intelligence and foreign internal defense operations.

DeSantis isn’t pretending to be a military enthusiast, he is one.

At the time of writing, the Florida Governor and Flordia’s First Lady, Casey DeSantis are in attendance at the funeral for FLDE Special Agent Jose Perez. According to his obituary, Perez served for over 21 years in the U.S. Marine Corps, the U.S. Navy, and the U.S. Army National Guard along with 30 years of public service in law enforcement.

It is awkward timing for Fried, a sitting Florida official, to make criticisms toward paying homage to the armed services be it in pro-military campaign themes or real-life circumstances.

I can’t confirm if Fried saw the new Top Gun movie, but I saw it in theaters… twice. To view it on opening night tickets had to be purchased in advance, it was a packed house. There was more audience participation than I can remember ever experiencing at the movies, where normally even a whisper is considered a social faux pas or disturbance. But on this night, there was full-on cheering. As the film ended and movie-goers were exiting the venue, I realized that many had dressed up in Top-Gun-themed apparel and jackets. My takeaway was simple: That was the most American s*** I’ve ever seen. Fried acts like she’s never heard of cosplay before, or apparently any other aspect of pop culture. As my RedState colleague Brandon Morse wrote about, movie-goes are still putting up box-office record-busting numbers for the film.

Not only did DeSantis have his thumb on the pulse when he portrayed ‘Top Gov’ (not Tom Cruise), Fried clearly lost in the beauty pageant she references as “looks and charm”. For a female (sorry if I assumed the gender here, there are no pronouns in the bio to complicate my day) Democrat demagogue, she put a lot of importance on vapid vanity. As a woman, if I was ever noted for my ‘looks-n-charm’, I would be disappointed they didn’t notice my ideas, or fortitude, or how some people flinch when I walk in the room because I might be there to whip the vote right out from under them. How charming, right? But if you’re a Fried-kinda-woman, the importance of others’ skills comes after both looks and charm. Have a good time posting thirst traps and selfies, then.

I think my colleague Brad Slager said it best when he tweeted “Trash-talking the governor you cannot face because you were decimated by a charisma-free political chameleon is not the flex you think it is.”

Slager is of course referencing the Democratic nominee running for Governor who beat Fried in a 24-plus point landslide, Rep. Charlie Crist.

Fried’s being wrong about everything on Twitter doesn’t end at her misguided tweets aimed at Governor DeSantis, she’s apparently confused about how policy and memes work, too.

Much like how Fried thinks the Top Gun fighter pilot is Tom Cruise and not ‘Maverick’, she thinks ‘Dark Brandon’ is POTUS and not… a meme.

For a public policy advocate in an industry Fried has a personal stake in, she seems confused about the President’s authority to reschedule a drug under the Controlled Substances Act. Actually, among those listed who can request the DEA or HHS to review the scheduling of a substance, the president is not included.

According to Title 21 USC Controlled Substances Act Section 201 drug manufacturers, medical society or association, a pharmacy association, a public interest group specifically concerned about drug abuse, a state or local government or an individual citizen can petition to have substances added or removed from the drug classification schedules. The president has as much power to petition for review of a substance as any one of the members of the public does, so long as he does so in his personal capacity. Not that he can’t write a memo to influence a process that has nothing to do with his executive office… or install a weed cabinet at HHS (which seems like not the best focus of the agency, since we are on year three of figuring out what public health should entail.)

Once rescheduled, the result wouldn’t be “legalization” per se, since a determination ‘Schedule I’ means the substance is said to have no medicinal applications. Therefore, rescinding cannabis as a Schedule I drug most directly impacts the ability of the scientific and medical community to study it, develop products, and potentially accept it as a treatment in some standards of care. I don’t have a strong opinion on pharma-cizing marijuana, because I think the local regulated growers are doing just fine without Big Pharma’s “help”, but do agree it can be used medicinally. I’ve seen speeches given by patients with degenerative diseases who had major quality of life improvements, for example. 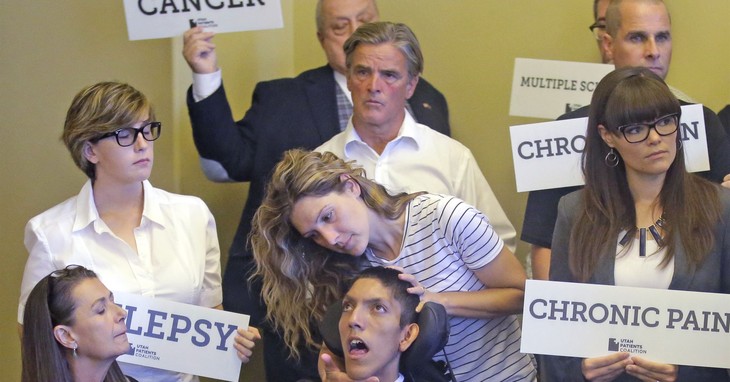 What rescheduling wouldn’t do is make having a sack of weed in your pocket legalized in states that still prohibit possession by law. So once again, Nikki Fried is wrong about everything. The meme isn’t POTUS, the office of the President doesn’t control drug scheduling, and de-scheduling marijuana doesn’t “legalize” it for the public as much as for the scientific establishment.

This isn’t the first time the public has had to examine a politician’s claims that marijuana could be rescheduled from the Oval Office, we already endured this rhetoric when Sen. Bernie Sanders ran for president, vowing to legalize it on day one… in all 50 states.

As pro-marijuana publication Marijuana Moment concluded, it’s much more likely for legalized cannabis to come as an Act of Congress writing,

Thus, changing marijuana’s classification under federal law without an act of Congress is far more complicated than a single stroke of a presidential pen.

Ya think? And, of course, it wouldn’t legalize it in 50 states…or any states, actually.

In conclusion, Nikki Fried is fried.

Now, please excuse me while I go find some children to talk down from their jet-fighter Halloween costume ambitions to have them focus on their looks and charm, instead. Why would they want to portray Tom Cruise, anyway? Amirite, Nikki?